This past weekend was a long weekend here in Ontario, and through some minor scheduling miracles, the entire clan was able to gather at my mother's - three brothers, two sisters-in-law, and three nephews, two of whom had had their first birthdays in the last couple of weeks. So it was a good family weekend, and as an added bonus, on Sunday my 5yo nephew and I got in a couple of games of Mighty Monsters by Ganesha Games.

Theo's keen on giant monster movies, aided by uh, one of his uncles. So much so that when I arrived Saturday morning, I learned he'd been bet that he couldn't go the entire day without saying "Godzilla".  He lost about five minutes after my arrival, and got served dessert last that dinner.  He loves to look at my 3" gashapon collection and was interested in playing a game, although I don't think he really understood at the beginning what I meant by "game", versus say bashing toys together to see who wins.

However, I started by going over four basic rules we would follow for any games we play with my "toys":
He thought those were good rules, so we set up my black vinyl matting that I'm going to use as the streets for my monster cities.  One interesting thing I learned was that I'd somehow assumed these were 18" by 36", so using two would give me a 36x36" footprint.  Instead these are about 45" long, so I'll either roll with that or chop these down to 36", or do both (I have four in black, four in gray).  I need 36" whenever they're going to be lined up with my 36" square blue felt mats for water.

I then set up what cardboard buildings I had ready, which isn't yet enough to fill the mat - they also haven't been based on gray tile to form blocks.  We filled in the mat with overturned baskets, Duplo blocks, and other toys.  I also had my unpainted Monopoly buildings with me, so Theo built the suburbs with them.

From there we picked monsters and went at it.  Theo of course went with Big G, and I took classic Gigan.  This was my first time with the rules, but things went pretty smoothly - there were a few errors, but nothing that affected the result, and I think Theo got the most breaks. He generally was able to play along, he was doing his own adding and making his own choices.  I gave him the proper set of Godzilla ratings, rather than a simplified version as suggested by the rules, and it wasn't a problem.

Anyway, so here's a shot of Gigan and Godzilla finally facing off, after taking a few pot shots at each other as they danced towards the middle of the city: 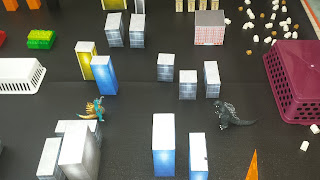 (as always, clicking on the photo brings up a larger version)

Godzilla lay a pretty good beating on Gigan - Theo was rolling well, plus Godzilla is a 450pt beast vs. Gigan's 395.  I finally realized playing the long distance game with Godzilla wasn't going to work, so I closed and tried to go for a grapple to bring my belly saw into play: 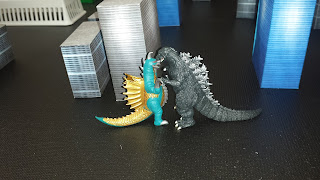 I finally got the grapple on, but my free hack at Godzilla with the belly saw failed, and when I tried to activate my head (with two yellow and one red dice), I rolled a one on a yellow and failed on the red, leading to two critical rolls.  Whereupon I rolled a Knockdown, and then a Knockdown, which becomes a Knockout.  So game over for Gigan!

I'm not entirely sure if you're supposed to only roll once even if your dice roll says twice, so maybe I would have survived another turn, but I was pretty much at the mercy of Godzilla at that point.

Theo then found the Final Wars version of Gigan in my collection, and for game two he went with the original version of Gigan from that movie (the one with the blades for hands, not the chainsaws), and I took modern Gamera.  Both were 450 point monsters, so in theory a fair fight.

Gigan tried to get a bit cute though, and Gamera was able to track him down and get in hits with both his fiery breath and his plasma chest burst (which I later decided should be a one-shot weapon).  The game was running late and we were supposed to watch a Gamera movie later in the afternoon, so we called it a day on the gaming front with a victory for the great turtle.  Theo's attention was also starting to wander - I suspect he wasn't keen on being on the losing end.

We went on to watch Gamera - Attack of Legion, his first Gamera movie, and he loved it even though he couldn't keep up with the subtitles.  He asked later to play more Mighty Monsters the next time we're together, and from my list of potential games, also some fantasy (he's painting some Reaper Bones goblins and ogres), using Songs of Blades and Heroes.  He was intrigued that it used similar rules to Mighty Monsters, though when he asked what the difference was, for some reason I missed the obvious - that you don't have to roll for each body party.

Next I hope to post some photos of other scenery I'm working on for Mighty Monsters, including some useful 3D puzzles and other trinkets from eBay.  Here's a teaser... 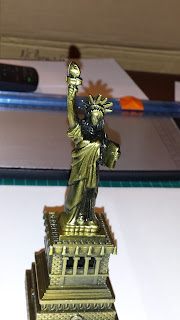