In today's blitz of posts, I'm also taking a stab at working through my backlog of in-game pictures from our club games in Scarborough using the Ruse de Guerre rules our host Glenn wrote for Polemos.  The rules have been out since the winter, and for a variety of reasons, including the publication of the rules, we've been having very busy game days recently.  This is from July, and as it was a heroic French victory, and I was on the French side, I'll post it first as I catch up on AARs.  The text of the AAR (below) itself is from Glenn. 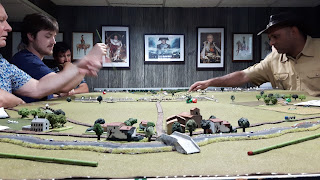 Probably about mid-game, from the Spanish end of the table, the force on the hill is Spanish and is holding the dominant hill on the table, with its artillery having double the normal firing range and being blocked by nothing. 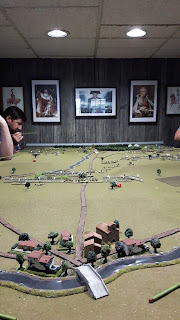 Same time in the game (at least according to the photo time stamp), but without arms in the way and a slightly different view, this time being able to see over that big damn hill. 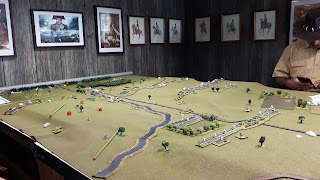 The end of the game - the hill on the left has been taken by the French, with the elite Spanish division there having routed off the table.  With the other two Spanish-held hills unable to support each other, they decided to withdraw across the river, surrendering the field to the French.

Glenn's report (he was umpiring) [also note I'm Chris, Christopher is another player who's been coming out lately]:

Blake (Bruce) was informed by his rear guard commander Romana (Dave) that unless the army offered battle his force would be overrun by the French. Blake decided to make his stand at Espinosa de los Monteros. After holding a council of war with his Divisional commanders the following battle plan was agreed upon. Martinengo & Mahy (Tish) would hold the high ground on the right flank. Riquelme & Mendizabal (Jason) would control the main road into Espinosa. Figueroa & Carbajal & Reyna (Doug) would control the high ground in front of Espinosa. They would also form a Grand Battery that could fire over most of the area to their front. Romana would take his crack Division to the high ground on the left flank. Once the French approached his position he would withdraw his men back behind the stream where the Grand Battery could destroy his pursuers.

Ruffin exchanged artillery fire with the Spanish and took some heavy casualties. Two battalions were forced to retire due to their losses which greatly thinned the French line. At one point Martinengo & Mahy contemplated attacking the French but Blake refused to give that order.

Both Villatte and Lapisse pushed their men forward as fast as they could which gave Romana very little time to withdraw. Although he knew his position was precarious he was confident that his crack troops could handle the French. Today, however, Villattes men were ready for a good fight. Every volley brought death and destruction to the Spanish. Coupled with the pressure from Lapisse, Romana took personal command of his lead units only to be cut down in an attack.

Romanas second in command tried to pull the Division back together but it was too late. The force was too badly shaken from the loss of their leader and the never ending firing from all sides. The Division broke and fled.

Seeing the pressure that Romana was under Blake started to ride over to him, but it was too late. He could clearly see that without his crack Division his army could not stand against the French and he immediately ordered a withdrawal.

The "Honours of War" for this battle go to Christopher for taking down Romanas Division of 10 blocks.