Finally wrapped up some figures for Kull and Imaro this evening, as well as some other odds and ends (the latter for another post). For the stands of izingogo (hordes of killer baboon-men) I took pictures at each painting step as a bit of a how-to. Photos are still a challenge, had to take about 4 for every one used here, and the erriten is still a crappy photo. The one that got the colours right wasn't in focus, and the one that was in (marginal) focus doesn't show the colours properly!

You can click on the photos to see a larger image, and I'd recommend doing that for some of them if you're going through the step-by-step painting section. 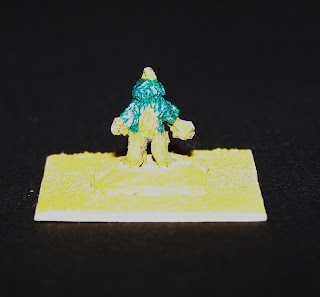 Mr. Erriten. Not entirely satisified with the final result. The paint job was ok (despite this photo), but the body shape doesn't quite work out, he looks kind of like a muppet gone wrong. He'll do for now, till I figure something else out. 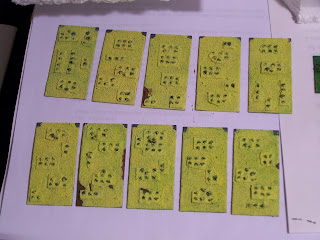 Ten bases of izingogo after getting the base painting done (moon yellow - green wash - cadmium yellow drybrush). Some dirt areas added as well. Don't need to be too careful here, the figures are getting their first coat of paint next.

These figures, by the way, are IKF8 Goblin/Orc Infantry Warband with the standards cut off, shields removed, and the bases cut up into varying shapes. Cutting the bases in half made getting rid of the standards much easier, which was my first objective, but once I got into it, I went from just turning each base into two bases to multiple semi-randomly shaped bases. The one exception was the lead stand (with the standard intact).

Once I got through slicing off the shields the results were kind of hit and miss, some still looked like figures, some looked liked boulders. I even turned a few stumps of the standards into figures. So the smaller bases I think help hide this by breaking things up. 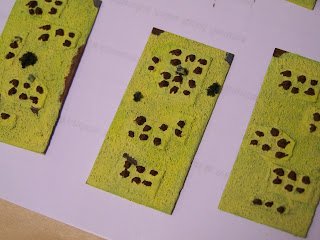 All the figures have gotten a thorough coat of dark chocolate brown. Found some interesting shapes once I got them under the magnifying light. Little tail or leg appendages here or there. Painted some, left others as base colours. 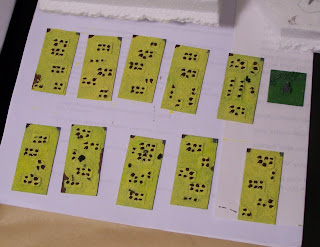 A view of the horde after the first coat of paint. 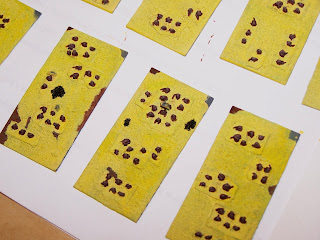 Next I drybrushed "Mississippi Mud" over them, it's a kind of grey-brown, lighter than the dark chocolate. If you look at some baboon pictures, they have that same sort of greyish tinge to them. I wanted to add a third colour around their heads, so I made sure I drybrushed around the sides too, otherwise just the head would pick up this colour, and then I'd end up painting over it in the next step. 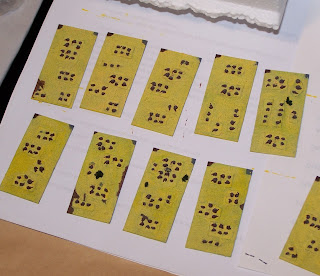 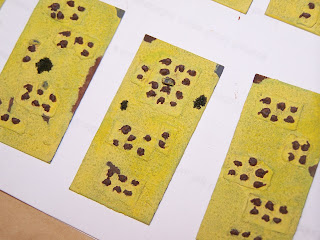 Finally I added nutmeg brown "faces" to them, although the actual splotch was sometimes to the front of their head, sometimes their top, depending on what I thought of each individual. If I could kind of see a face I'd hit that, otherwise I'd go more for the top. The idea was for an overall effect from the third colour.

I considered drybrushing another lighter brown over everything, but I was happy with things to this point, and my experience has been that I always go one step to far. 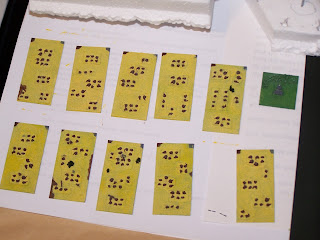 The horde effect after the "faces" were added. 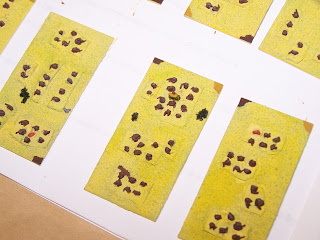 You'll note I'd added some foliage earlier without mentioning it, and then I had some "rocks" which were either figures that got trashed during shield removal or more stumps of standards. For the bigger ones I was trying for sort of an Ayer's Rock colouration, but got things a bit too bright. I think I should have gone for a wine red-brown rather than Georgian Clay.

Since I've started hitting the figures (but not the bases) with a coat of Future to prevent Dullcote from muddying things up, I'll leave these rocks uncoated and hope Dullcote tones them down a level. 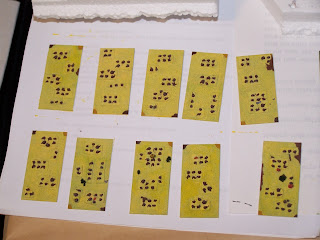 The final horde ready to take on those Cushite war lions!

The dreaded five-snake banner of Naama. Funny thing is I can't remember if I made up the banner or if it's actually canon...

You saw these guys after priming in an earlier post. The two sorcerers (left and middle) are done, the general needs to have his aides painted up, as well as the boulders behind him. These are all IKF2 Giants, with two different hand weapons on the right, and the one on the left (jr. sorcerer) had his snipped off.

Their flesh is actually supposed to be very pale, which may be why I had trouble getting their faces to come out in the photos. The legs are actually flesh, not leggings, if you want an idea of what the colour is supposed to be. 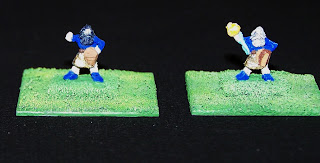 The giant kings' nobility are the sorcerers, so they get finer duds. The shields were snipped off and the remains turned into sorcerer supply bags. The younger sorcerer has his hand visibly on his hip, the other has his behind his bag. The one on the right also has his fireball ready to go. 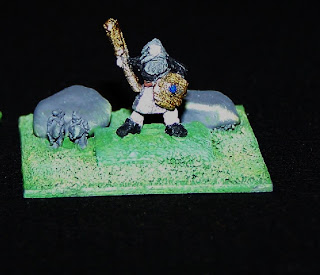 The giant king's general, wearing more practical armour and with his scepter of authority. His aides didn't get painted at the same time because I hadn't thought through their uniforms...

I have a hybrid giant-king general in his chariot on the table too, but ran into the same problem - after painting him, I didn't have a plan for the rest of the chariot!
Posted by CJR at 1:27 AM